I doubt I’m alone when I say I could spend hours upon hours on Pinterest. It’s like a black hole that sucks my time away. Just.one.more.scroll.  A short break in my day and the next thing I know two hours have passed and I’ve all but planned by my future child’s first through fifth birthday parties. I’m often quick to pin for no other reason than because a picture is pretty or because there’s something about it that I’d like to remember later. What makes a picture pin-worthy? Or why do I only rip out certain pictures from magazines? I’ve never taken an interior design class (although I’d love to), so in an effort to hone my skills for spotting and creating great interiors, I’m going to try and really break down exactly what it is that I like. I mean, people get college degrees in this stuff, so there has to be some sort of science to it. 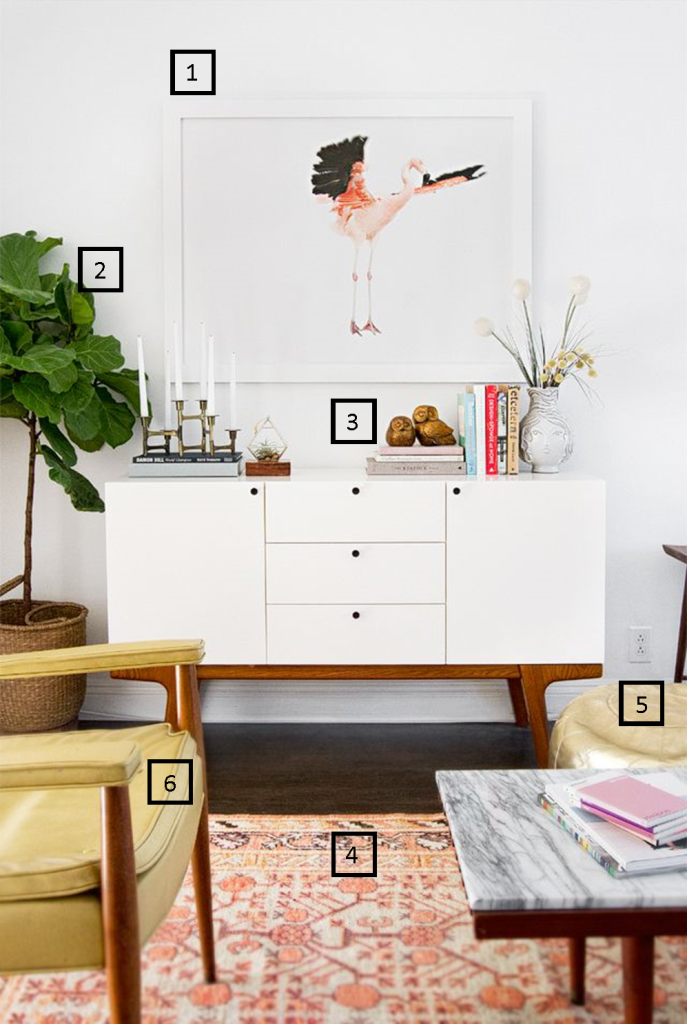 1.  White frame + white furniture on a white wall gives your eyes a chance to rest and allows you to focus more on details – the books, the owls, the terrarium, the flamingo all pop a little more because they’re backed by white.

2.  A large plant gives the space some warmth and makes it feel a little more lived in. It’s softer against the hard lines of the furniture and art. Not to mention the green that gives the space a some extra color.

3. Every room needs an animal. Did you know that? It’s what I’ve been told forever, so I’m sticking to it. She hit the mark three times – two owls and a flamingo. That’s got to be some good feng shui I think.

4. A bold rug softens the hardwoods and really pulls out the colors of the flamingo. Bold enough to be a statement on its own, but neutral enough not to distract.

5. Metallic reflects light and has more visual impact than a non-metallic.

6. The color is unexpected, but the shape and the leather keep it neutral and sophisticated.

What do you think? Do you agree or did I miss something? If you’re an interior designer and have an opinion, I’d love to hear it!